I’ve known the Burd for just over two years now, and have always been impressed (with good reason) with her knowledge and passion for issues of social justice and equality. As well as being a good friend to me and our family.  So I’m doubly honoured to be asked to guest blog here about the Hardest Hit protest in Edinburgh on Saturday. 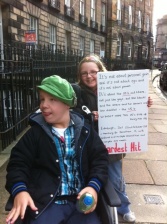 Along with my husband, we are parents to three children, two girls and a boy, aged 18, 17 and 10. Our son Jonathan, (aka Joff) the 17 year old, has Lowe Syndrome, an ultra rare, life threatening and life limiting genetic condition that affects boys only.  As far as we know there are only another two people in Scotland living with Lowe, which poses its own particular difficulties in accessing services and planning for the future.

How Lowe affects Jonathan is that he has profound and multiple learning, physical and sensory disabilities and complex health care needs.  Without trying to make him sound tragic, he has a long list of support needs that means he needs constant adult supervision to keep him safe, well, fed, clothed, clean and occupied.  Being his full time carer along with my husband has utterly dominated our lives for the past 17 years and has given us both a keen understanding of how people with additional educational, health and social care needs are supported and valued in our UK society.

On the day, I had to make a decision about how early to arrive at the venue.  Too early and Joff would be bored and agitated sitting stationary in his wheelchair – he likes to be always on the move, one of the reasons he hates shopping.  Too late and you’d miss the speakers.  So I am embarrassed to report that I timed it wrongly and arrived later than I intended.  Some of that was having to park about 20 minutes walk from the rally point and negotiate some difficult pavements and streetworks.

However, the three or four people I heard told me nothing new.

The US’s all know that these welfare reforms being proposed are badly conceived and causing enormous untold fear up and down the country. For example, it’s entirely possible that Joff will lose his entitlement to the Mobility component of Disability Living Allowance when the Personal Independence Payment is rolled out next year. The reason being that because I push him around in a wheelchair, that’s proposed as being equated as the same level of freedom I have getting around as a healthy adult.  I mean, really?

The US’s know that disability benefit fraud is being touted in the media as the latest thing to crack down on and the taxpayer is fed endless articles about people with disability being society’s bottomless takers.  The US’s know the truly horrible stories about the execution of the work capability assessments being carried out by ATOS and the stresses in particular for people with fluctuating conditions and mental health problems.  I feel that “execution” is a particularly apt word here.  The US’s know that social care should be of concern to every household as most people will need some help at some stage in their life.  This last line was touted by Iain Gray from Labour who was roundly booed as he took the microphone.

If that’s true, why were there only 1000 people out of 5 million Scots there on Saturday? 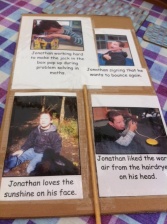 I made up a placard for my youngest daughter to carry.  On the back, some laminated photos of Joff at his excellent additional support needs school which he leaves next summer. With not a hint about how he’ll be supported afterwards.  I fully expect to hear the following phrases over the next few months.  “Local authority budget cuts” “Long waiting lists” “Recorded as an unmet need” “ there are lots of families much worse off than you”.

On the front of the placard, something paraphrased from the American gay rights activist Harvey Milk.

“It’s not about personal gain, and its not about ego and it’s not about power. It’s about the US’s out there, not just the Gays, but the Blacks and the Asians and the Seniors and the Disabled. The US’s.

Without hope, the US’s give up.”

Perhaps I’m just dog tired after almost 20 years of caring and fighting for Joff, but I saw no reason for US to hope on Saturday.

2 thoughts on “Without hope, the US’s give up”

What I witter about most